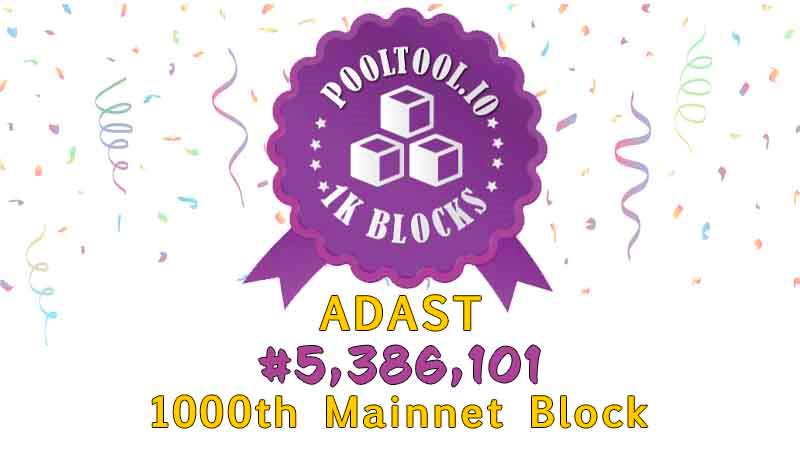 With the help of our delegators and the Cardano community, we’re delighted and humbled – and more than a little giddy – to announce that ADA Strong’s primary stake pool has just processed its thousandth block on the Cardano network!

While the achievement is not unique, it is an achievement, and it’s a very gratifying one – not just for us, but for our delegators.

Especially for our delegators, in fact.

Now, ADAST is not the largest pool, nor is it the most popular pool. No one pool can lay such a claim for very long, after all. That’s by design.

But ADAST is exactly what any good stake pool should be. It has been successful, it has been rewarding for its members, and it has played a part in helping grow Cardano in these early days of the groundbreaking Shelley Era.

And it’s all of those things thanks to our delegators. They – not us – are the power behind Cardano, and we’re just thrilled to be along for the ride.

Of course, the ride isn’t over. This is just the beginning, and ADAST will keep on keeping on, full steam ahead.

However, in the here and now, we want to give ADA holders (as well as those new to Cardano in general), a bit more information about the performance of our ADAST stake pool.

The following numbers are the those for our primary pool (ADAST 1), current as of publication:

To be clear, we’re not saying we’ve in any way outperformed all other Cardano delegate pools, because that’s not the case.

Nor is ADAST totally unique, even when it comes to our strong commitment to holders delegating with us and to the principles of Cardano itself.

The reality is this: There are many excellent ADA pools out there, and we’re just one of them.

Instead, while we’re elated to have verified 1000 blocks on the ADA network this soon, we’re even more interested in using this opportunity to point out the viability of the system as a whole.

Further, you’ll find said success to be representative of many of the ADA pools out there.

In other words, you should see these kinds of numbers – and these kinds of returns – with any pool you pick, provided it’s operating under (but not too far under) the saturation threshold for ADA rewards.

And that point is doubly relevant in right now, as the Cardano saturation threshold is about to drop again, halving to roughly 32 million ADA in March.

We wrote Tuesday about what this means for the average ADA delegator, but the short version is this:

When the threshold is reduced next month, any Cardano pool comprised of more than 32 million ADA will see diminishing returns in the rewards earned for its members.

Right now, ADAST is just over that limit.

Thus, if you’re already delegating with us, you should consider moving your tokens to ADAST 2 or any other pool that is currently under that new forthcoming limit.

For those of you delegating elsewhere, the same strategy applies: You should find a secondary pool with the same host – or a pool with a different host – that’s hovering right under 32 million ADA.

Of course, many ADA holders likely haven’t delegated their Cardano at all. If that’s you, our primer on how to stake Cardano is more relevant than ever.

All that said, we’d like to again thank our delegators for their commitment to Cardano, and we’d like to welcome all the newcomers to join us – and others – on this crazy rocket.

A thousand blocks is just the beginning. It’s a good start, but it’s just a start.

And while we’d normally pop the champagne to celebrate, we actually kind of used that money to buy more ADA…