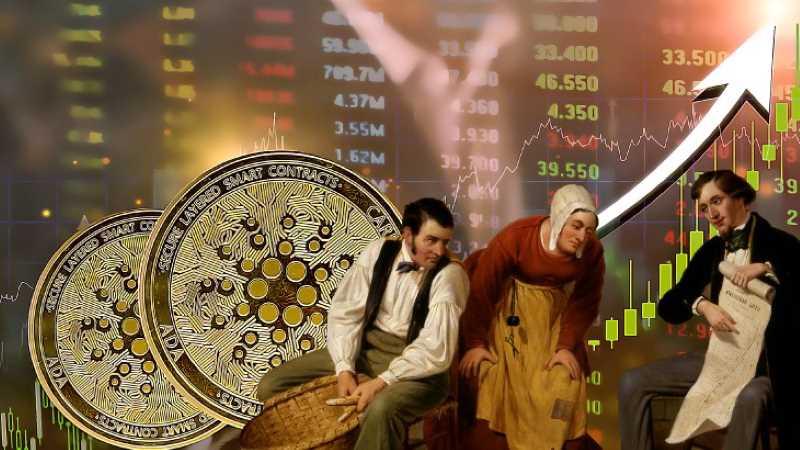 If you haven’t significantly boosted your Cardano stack yet, you haven’t been paying attention. Luckily, the ADA price is still hovering around $0.50 per, so there’s still time.

Of course, it can be tempting to wait for an even lower Cardano price before pulling the trigger on doubling down. The problem with that, though, is that it’s impossible to know exactly where the Cardano value will bottom out this cycle.

On the other hand, it’s similarly impossible to know when ADA will start its inevitable run back up.

That’s why – as we always recommend – it’s important not to worry about getting in on the absolute ground floor. A better strategy is to simply ask yourself the following question:

Which part(s) of my anatomy would I literally chew off to the nub to buy ADA at $0.50 this time next year?

Okay, maybe not literally, but you get the idea.

Our guess – given the current growth estimates and growth timeframes floating around for Cardano – is that the ADA price isn’t going to drop too much lower. Additionally, we don’t think the ADA price is likely to be this low for too much longer.

In other words, go ahead and get in.

Buy Cardano now, stake your Cardano as soon as possible, and don’t worry too much about the coin falling in value by a few cents in the next week or two. It might, and it might not. It’s all functionally irrelevant to your overall investment.

Now, even though we’re big on ADA at ADA Strong, we’re not only invested in Cardano, and we don’t think you should put all your eggs in one basket, either.

Cardano is our favorite cryptocurrency to be sure, but it’s not the only one we like or that we think has a solid future.

Other popular assets worth your time and consideration are Solana (which is trending just behind Cardano of late), Tron (which weathered the recent crypto crash better than just about any other asset), Avalanche, Polygon, and Polkadot.

We also like Ethereum given its current price of just around $2000, which should skyrocket once the platform shifts from proof-of-work to proof-of-stake (albeit perhaps after some dips due to general misgivings, market trepidation, and the growing pains of fundamental change). And, of course, Bitcoin’s never a bad idea.

On a final note, if you know where to actually buy the stuff, it might be wise to stock up on some Ripple as the long-in-the-tooth SEC lawsuit seems headed for a settlement and a quick relisting for the XRP asset.

Oh, and don’t forget Uniswap. Get some of that, too.

Honestly, there’s a lot of value across the board right now. With all the crypto prices down bigly – and given the fact that we’re likely at the bottom of the dip (or near enough to it that any more movement won’t matter all that much) – you may not have a better investment opportunity in the crypto space than you have right now.

Of course, in the case of Cardano (and, for that matter, most other crypto coins), that all depends on where you’re getting your information.

Also, this is kind of interesting. We wish we had the time.