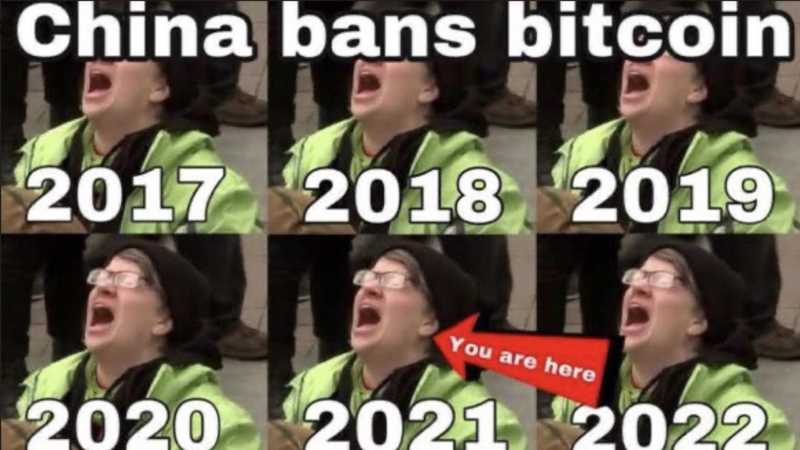 And according to various entrenched old money shills and FUDsters in the mainstream media, the crypto market is tanking.

And here’s their lede:

“China is intensifying its crackdown on cryptocurrencies.

Chinese government agencies including the country’s securities regulator and the People’s Bank of China (PBOC) said in a statement on Friday that all cryptocurrency-related business activities are illegal and vowed to clamp down on illicit activities involving digital currencies.

The agencies said that overseas crypto exchanges would be blocked from providing services to Chinese residents through the internet.

Bitcoin (XBT) fell about 5% on the news. Ethereum, another leading cryptocurrency, was down 9%.”

Now, the first hint that we’re dealing with amateur hour (and we say that as amateurs ourselves) is that the official Bitcoin ticker symbol is BTC, not XBT.

Yes, some markets designate BTC as XBT for some ridiculous globalist reason or another, but that becomes problematic when there’s another actual cryptocurrency called XBT.

In the real world, XBT is something called Elastic Bitcoin, which uses the Ethereum network and works similarly to Wrapped BTC (WBTC).

The second hint, of course, is that it’s all a big load of shitcoin to begin with.

The central claim – that Bitcoin is “plummeting” – can be debunked rather easily.

That’s hardly a plummet, because anyone who’s been paying attention to the crypto market for more than five minutes knows that a daily 5-10% swing in either direction is a dead cert.

It happens all the time.

Was that the Great Depression or something?

Today’s BTC “wipeout” is nothing more than a PR stunt by the MSM and a desperate flail on the part of China itself.

Last week, Evergrande – the (erstwhile) biggest real estate developer in the world and one of the (erstwhile) crown jewels of China’s (erstwhile) booming economy – released a quaint little memo that it would be defaulting on $300 billion of debt.

So what’s the first thing every affected investor in China did?

They dumped their Bitcoin hodlings.

Fast forward a week, and China – reeling from the Evergrande fiasco and trying desperately to control the financial fallout – has now banned Bitcoin and other cryptocurrency trading.

We’re sure that’s just a coincidence.

Then, in the several years since, they’ve banned it about a hundred more times.

It’s a freaking cliché at this point.

And don’t take our word for it, either.

Per Ulrik K. Lykke, executive director of ARK36 (via MarketWatch):

“While each time this [China’s crackdown] happens, the markets react with a price drop, each time the effect is smaller and more short-lived. The ‘China bans Bitcoin’ story has gained almost a meme-like status in the Bitcoin community because of this.”

The whole point of crypto is that China can’t do a thing.

So kick back, relax, and buy the dip.