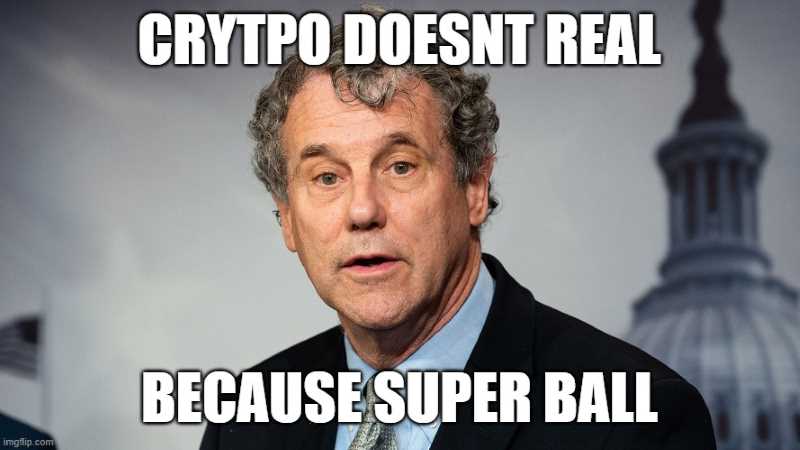 Well, the Super Bowl just happened, and that means you probably saw about a million ads for “crypto.”

Naturally, that fresh spotlight has forced some of the most vapid, basement-IQ politicos to sound off against the industry and bleat for endless nebulous regulations to “fix” everything.

Specifically, Ohio Senator Sherrod Brown – Chair of the US Senate Committee on Banking, Housing, and Urban Affairs – took exception to the premise of crypto altogether, using the Super Bowl as evidence that crypto isn’t money.

“The fact that these companies felt the need to advertise at all is a bit of a giveaway about one of their major claims — if this were actually meant to be used as currency, why would you need to buy ads? I’ve never seen the Federal Reserve buy a multimillion-dollar commercial for U.S. dollars.”

Well, there are three easy ways to eviscerate the abject idiocy of this broken complaint.

And those – as we’re sure you’ll agree – are most definitely and assuredly never featured in every commercial break for every broadcast on every channel literally ever.

Secondly, the US dollar itself is actually touted relentlessly in all facets of the entertainment and marketing industries in America.

Have you ever seen the price of an item advertised on TV? In the US, those prices all have dollar signs in front of them. Every single time, with no exceptions.

Thirdly, if indirect marketing doesn’t do it for you, the US government has a long history of directly marketing cash to the American public.

For example, the US Treasury routinely advertises changes to existing money designs.

We’re old enough to remember this $32 million ad campaign to sell the public on the then-newly redesigned $20 bill (which still sucks).

Of course, the above ad was from 2003, only 28 years after Sen. Brown – a useless “Russian studies” major from Yale (LOL) – first entered American politics. No wonder the Chair of the US Senate Committee on Banking doesn’t understand money or advertising…

Here’s one of the AP’s innumerable free ads for that aforementioned $20 bill:

For good measure, here’s another money ad, this time about the United States’ “50 State Quarters Program” from 1999:

And remember that push for the “New Golden Dollar” back in 2000? You know, the thing made out of copper, zinc, manganese, and nickel – but no gold whatsoever?

We were saving that throwback as a rebuttal for some future Brown criticism of crypto ads being “misleading” or something, but here you go:

You get the idea.

Plus, if you still think the powers that be don’t invest heavily in marketing their fiat nonsense, just wait until the Tubman Twenty™ gets dropped into circulation.

Fiat shills. Not even once.

Cardano shills, on the other hand…

TL;DR: If you want to stick it to these lying, thieving fiat goons, ignore the hype and buy the dip. The price is right.